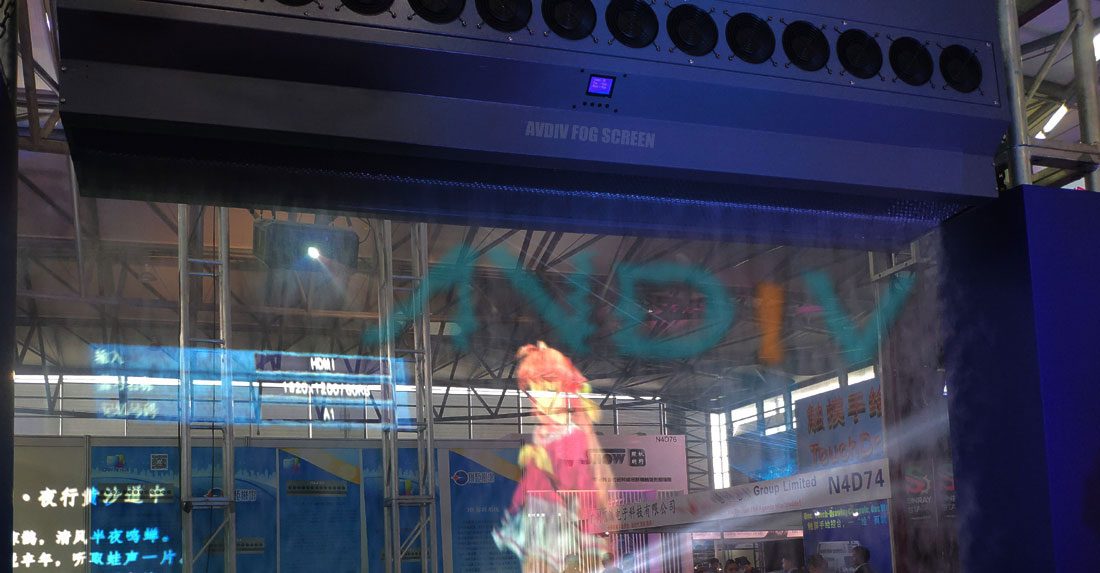 3D fog screen (fog curtain), also known as the fog screen, is a new type of exhibition equipment.
It can be seen literally that it is an imaging device that uses fog as a carrier.
The most significant difference from the traditional screen is that it is analog illusory.
It gives a deep impression to the mysterious and ethereal feeling.
In addition, it also has the function of purifying the air.

If necessary, It can also play the role of “humidifier”.
“H2O” produces 1-10μ in the process of over-frequency oscillation.
The fog screen use as a display platform in the stage, exhibition.

Can achieve a new stereoscopic enjoy.
At the same time purifying our air keep our health.

At the same time, it can also be widely used in science museums, exhibition halls — shopping malls, entertainment venues, showroom, and other relatively closed air display windows.
Can achieve a new stereoscopic enjoy.
At the same time purifying our air keep our health.

The fog screen machine is using an ultrasonic atomization generator to generate a large amount of particle mist.
Combined with the principle of air flow to produce a plane fog.

The particle plane characteristic of the particle is used as the optical path carrier, and then a special smooth and vivid medium fluid is projected on the carrier to form an imaginary stereoscopic image in the space to form a three-dimensional stereoscopic image, giving a new kind of space.

3D makes more and more people feel a visual feast, and its appearance once again pushes our performing arts industry to a climax. It has begun to spread to various fields and exudes brilliance at a rapid speed, and with its novelty, Dreamy, beautiful, atmospheric, shocking visual experience to wins people’s onlookers and sought.

Why Us!
Professional & Competitive price & Fast Delivery & Good after service.

Contact us at once if you have any comments or inquire. Our staff will come back to you within 24 hours.